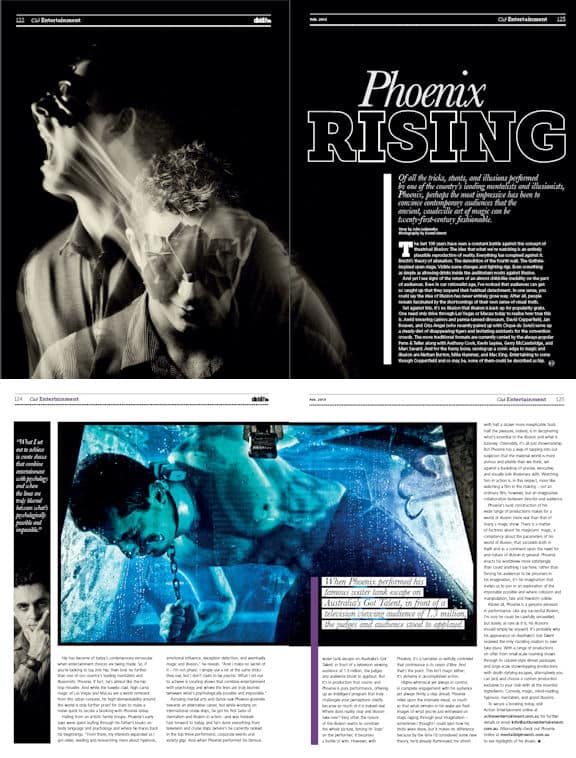 Catch Phoenix in this months issue of “Club Life Magazine” as they review & cover his shows with a glowing sense of enthusiasm.

Click on the image to the right to read the full article.

The Australian club circuit is redefining its image  and its acts, to bring in exciting & modern entertainers to its stages.

For some time now, the top cruise ships & fringe festivals have been the sacred home to entertainers & shows performing for the public.

Many people of our generation are unfamiliar with the thought of going to an RSL or club to see a show.

Sure, they have had shows listed, but many of them have been the same acts that have been seen for years, but Australian clubs are rejuvenating & reinventing the image of live shows, & this is a fantastic thing for Australians.

One of the most popular comments from guests who come & watch shows on cruise ships is  “WHERE can I come & see your show again? It was AMAZING!”.

More often than not this question has been met with the disappointing answer of “hrmm.. well, to be honest, I perform primarily at corporate events, TV shows, & occasionally there might be a public show, but other than that, it’s cruise ships”.

With Australia’s clubs opening their doors to modern, exciting acts, we may well finally see the resurrection of live shows & entertainment in Australia, & that would be a win for everyone.