What I’m finding fascinating of late in the realm of social media is the taunt… Not a harmful taunt but almost the IRRESISTIBLE baiting of the happy folks on social media. The minds natural urge need to be right, or to prove others wrong, the extremely brief moment of satisfaction when a person reads an image and realizes that they are the ONLY person to have ever solved this riddle, and it seemed so simple…. Possibly because it was so simple.

Then the moment occurs a split second later, and you realize that the 402k other people who have seen it also had the same or similar epiphany… Yes, sadly, it as (you knew all along, of course) a scam. It’s not as recognizably a scam, as for your sake nothing is lost, its just harmless fun… Either that or someone REALLY stupid and cannot think of a city with an “A” in it… really…?… REALLY? What’s the scam? Simple – your likes and comments that pump up both the facebook popularity, and the page rank for the page it originates from. It is in some ways similar to the way of which we, as mentalists are influencing your choices or answers, giving you what appears to be “free choice” which, in reality, you had never had.

Its a interesting look into marketing, and how various industries are catching up with our centuries old crafts. Let’s see how the images on this facebook page go on facebook, and potentially raise this rank. 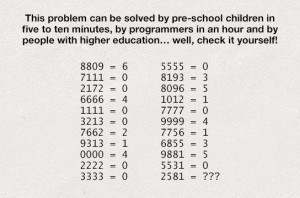