The Non-Psychic Medium On Studio 10

After a successful first visit to Studio 10, of which Phoenix performed a stunt that involved calling a random person from the phone book and influencing their decisions while reading their minds, Mentalist and Mind Magician Phoenix returned to the set to read the minds of the studio audience. 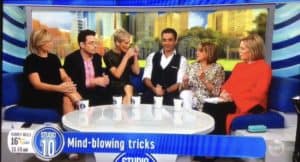 They warn you never to read the forums or posts by the public, but last time I had a quick scroll. One comment asked: “But can he do it to a live audience?!”
Given that I do this on a regular basis in my stage show, the answer was of course, “Yes!”. So this visit was about doing just that.

The studio audience were handed slips of paper asking for details like their first name and asking them to choose a number. I was not allowed near them until I was on set and ready to perform. 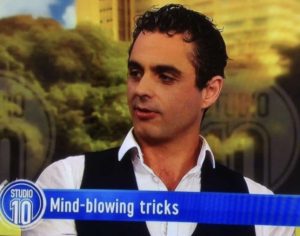 The audience members dropped their slips of paper into the box and the box stayed in full sight on-set until the moment of the performance, where Joe Hildebrand was asked to unlock the box, and pull out a few slips of paper.

And then the fun began… But that’s the last time I read the comments section – That was stressful!

One thing to note – As I always say in my stage shows – I am in NO WAY psychic. Scripted in as part of the performance today was my usual spiel about not being psychic, however, as can be seen, we ran out of time.

I urge you to consider that if I am not psychic, of which I am most definitely not, then please consider that characters claiming to be psychics are simply doing the same thing.